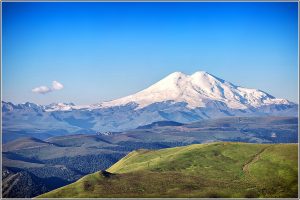 The great pyramid of Cheops — one of the wonders of the world
However, there are many other wonders in the world! In 2007, a list of the new seven wonders of the world was announced, which were chosen by international voting on the Internet and SMS voting. This list of “7 new wonders of the world” does not include any object from Russia, but in our vast Homeland there are many interesting and unusual attractions, as well as beautiful natural places worthy of the name “miracle”! It was decided to prove it with the help of the project “Seven wonders of Russia”. As part of the project, a national competition was organized to determine the best seven wonders of Russia. The contest was organized by Rossiya TV channel, Izvestia newspaper and Mayak radio station. The wonders of Russia were chosen by SMS voting and Internet voting. Among the contenders for the title of “miracle of Russia” were such interesting options as:

– diamond mine in Peace;

– the pole of cold in Yakutia;

– and many other wonders of Russia.

On June 12, 2008, the day of Russia, the results of the contest — 7 wonders of Russia-were announced on red square.

Baikal
Lake Baikal
Baikal is the deepest lake on Earth, the largest natural reservoir of fresh water, one of the largest lakes in the world in terms of water surface area. To the name of the lake ” Baikal “you can apply a lot of different epithets” most-most”, and the locals even call Baikal the sea because of its grandiose size. Baikal and its coastal areas are a unique ecological system with a rich world of flora and fauna. The lake is home to more than 2.5 thousand species of fauna, most of which are endemic, that is, found only in this ecosystem.

Peterhof
Peterhof Palace and Park ensemble
Peterhof is a picturesque Palace and Park complex founded by Peter I as a country Imperial residence. In our days the Peterhof which is often called Russian Versailles, became a symbol of the Russian Imperial scale and refined taste. Palaces, alleys, flower beds, fountains, statues and sculptures — all full of grandeur and recalls the beautiful bygone era.

Pillars of weathering
Weathering pillars in the Komi Republic
Weathering pillars on Manpupuner mountain (Mansi dummies) is a natural monument on the territory of the Komi Republic, representing seven outliers with a height of 30 to 42 meters. All pillars have bizarre shapes and depending on the place of inspection can resemble the figures of huge people or large heads of different animals. There are many legends about these unusual stone statues, and in ancient times the locals even deified and worshipped these Mansi dummies.

Elbrus
Mount Elbrus
Elbrus — the highest mountain peak in Russia and Europe, included in the list of the highest peaks of the world “Seven peaks”. Elbrus is a magical mountain that attracts not only climbers and extreme riders, but also ordinary travelers who come to the foot of the mountain to feel the greatness of the giant mountain.

7 wonders of Russia on the map

To visit all seven wonders of Russia is quite difficult, and it’s not just the huge distances between them. The valley of geysers and weathering Pillars are located within the reserves and access to them is limited. But nothing is impossible for those who set a goal to see all the wonders of Russia with their own eyes.

5 ideas for traveling to PragueCharles bridge-a medieval bridge in Prague over the Vltava river, connecting the historic areas of the Old Town and Prague Castle. The legendary Charles bridge, decorated with a unique sculpture…