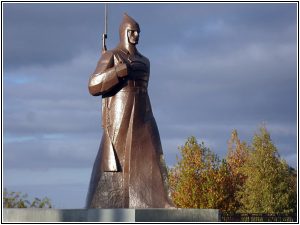 The monument, erected to commemorate the fiftieth anniversary of the liberation of Stavropol from the whites — is one of the most recognizable and famous symbols of the city of Stavropol. Stavropol residents call this monument simply “Budenovets”, “soldier” or “Soldier”, sometimes you can hear the name “Iron Man”, but more often it is affectionately called “Alyosha”.

Monument erected to commemorate the fiftieth anniversary of the liberation of Stavropol from the whites
Huge Budenovets (the height of the monument-about seven and a half meters) is located in the historical center of the city — on the square of the Fortress mountain, on the so-called “Air promenade”. The open free space around the monument gives it even more grandeur.

Monument to the red army in Stavropol
The authors of the monument perfectly managed to capture the red army in a dynamic pose: the soldier seemed to freeze for a moment on the move. Majestic, with a soldier’s mandrel and with a purposeful look, Budenovets marches marching with a rifle behind his back.

Monument to the soldier in Stavropol
The monument dedicated to the soldiers of the last civil war, today represents all the military heroes of Russia. At the pedestal of the monument are almost always fresh flowers.

The Grand opening of the Monument to the red army took place back in 1976. It is symbolic that the creation of the monument had a hand artist with the name of soldiers and sculptor with the name Verkhovsky.

Read more about the Monument to soldier-budennovtsu and other monuments of Stavropol, and the City cross can be found on the website
tur-stavropol.ru

Coat Of Arms
Nowadays, the area with panoramic views of the Northern part of Stavropol, which supposedly protects the stately red army, is very popular not only among tourists but also among the citizens themselves. Here “at Budenovets” appoint meetings and invite on dates, and also often arrange city sightseeing tours for school students and tourists.

Soldier’s square in Stavropol
Reconstruction of the Monument to the red army in Stavropol
In 2009, the birthday of Stavropol Monument budennovtsu updated, stained in a light brown color, and majestic Alyosha was even more beautiful.

If you decide to visit the city of Kresta-Stavropol, be sure to look “live” on the stately majestic soldier on the Fortress hill.